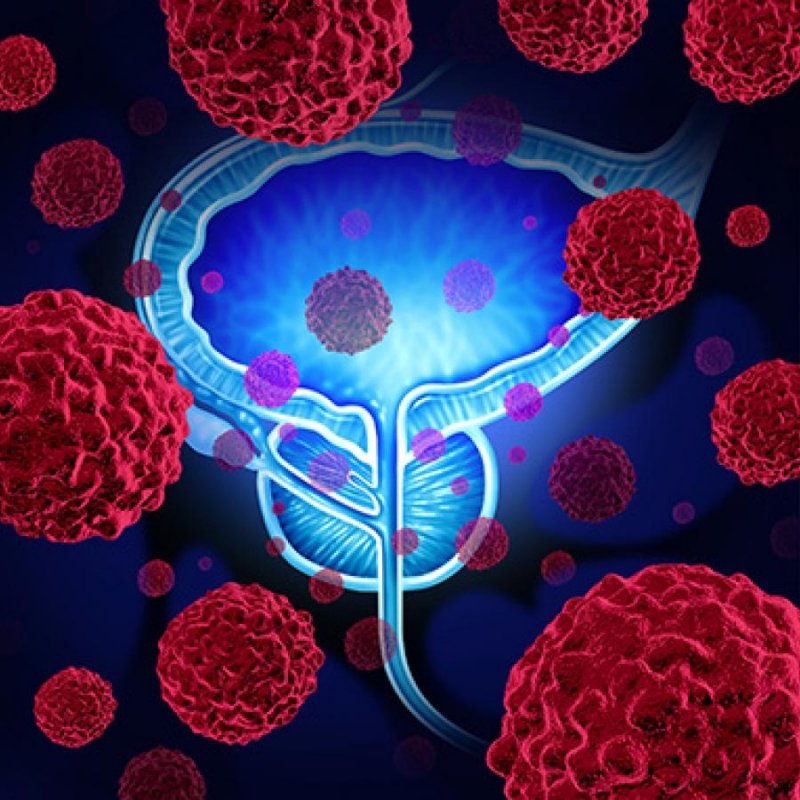 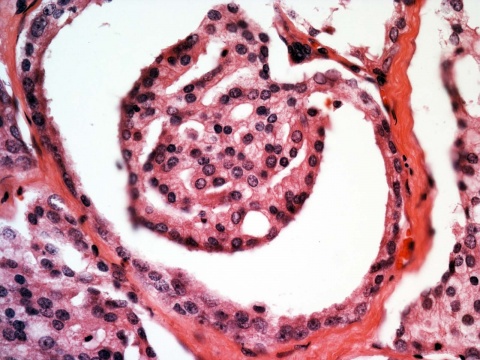 The photomicrograph shows a case of prostate cancer with proliferation of cancer cells forming a complex structure resembling a glomerulus. Prostate cancer with such a structure is considered to be moderate to high grade (Gleason pattern 4). Courtesy of Jiaoti Huang.Targeting a protein genome-binding process that directs expression of diverse cancerous genes could be an important new therapy approach for stopping the progression of late-stage prostate cancer, according to Duke researchers.

The study, published Tuesday, May 29, 2018 in the journal Proceedings of the National Academy for Science, examined the role of a cancer-relevant protein called androgen receptor-V7 (AR-V7) in prostate cancer cell cultures and patient tissues.

The AR-V7 protein oversees the regulation of multiple different types of cancer-promoting genes. But because these genes often vary from person to person, designing drugs to target them in the mass population has proved challenging.

“People are eager to find genes regulated by AR-V7, as AR-V7 itself is not targetable by anti-androgenic drugs, but we’ve found that those genes are different for each patient,” said lead author Qianben Wang, PhD, a professor of pathology in the School of Medicine.

In the new study, Wang and colleagues found that the AR-V7 protein always relies on another protein, HOXB13, to bind to a person’s genome.

“No matter how AR-V7 binds to the genome—it binds differently in different people—it always co-binds with HOXB13,” said Wang.

In the experiment, Wang’s team knocked out HOXB13 and found that AR-V7 binding is dramatically decreased and the prostate tumor becomes very small with the absence of HOXB13, clearly having an impact on cancer growth.

Prostate cancer is the most common cancer among men in the United States aside from non-melanoma skin cancer, according the Centers for Disease Control. The American Cancer Society predicts, that in 2018, 29,430 men in the United States will die from prostate cancer. Two currently popular anti-androgenic drugs, Enzalutamide and Abiraterone, were approved by the FDA in 2012. However, resistance to these drugs develops, often leading to treatment failure.

“It is as if HOXB13 is a partner in all crimes committed by AR-V7, the activity of which leads to resistance to these drugs,” said co-senior author Jun Luo, PhD, associate professor of urology at Johns Hopkins University, who initially discovered AR-V7. “It would be an exciting arena of research to find out whether a drug targeting HOXB13 will be effective in overcoming resistance to abiraterone and enzalutamide.”

Wang said that the next step for the team is to develop a drug to target HOXB13, as currently no drug exists.

“The discovery by Dr. Wang’s team demonstrates important mechanisms by which AR-V7 contributes to therapeutic resistance,” said co-senior author Jiaoti Huang, MD, PhD, professor and chairman in the department of pathology. “Through the dissection of the detailed molecular interactions involving AR-V7 and HOXB13, Dr. Wang’s work has shown us a new direction in our quest for more effective treatments of advanced prostate cancer.”