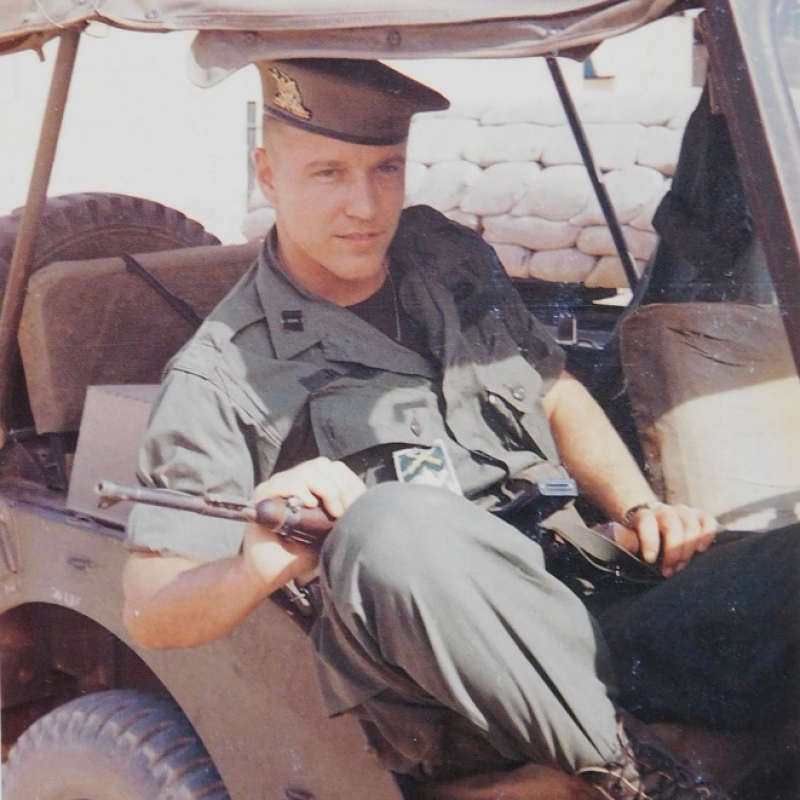 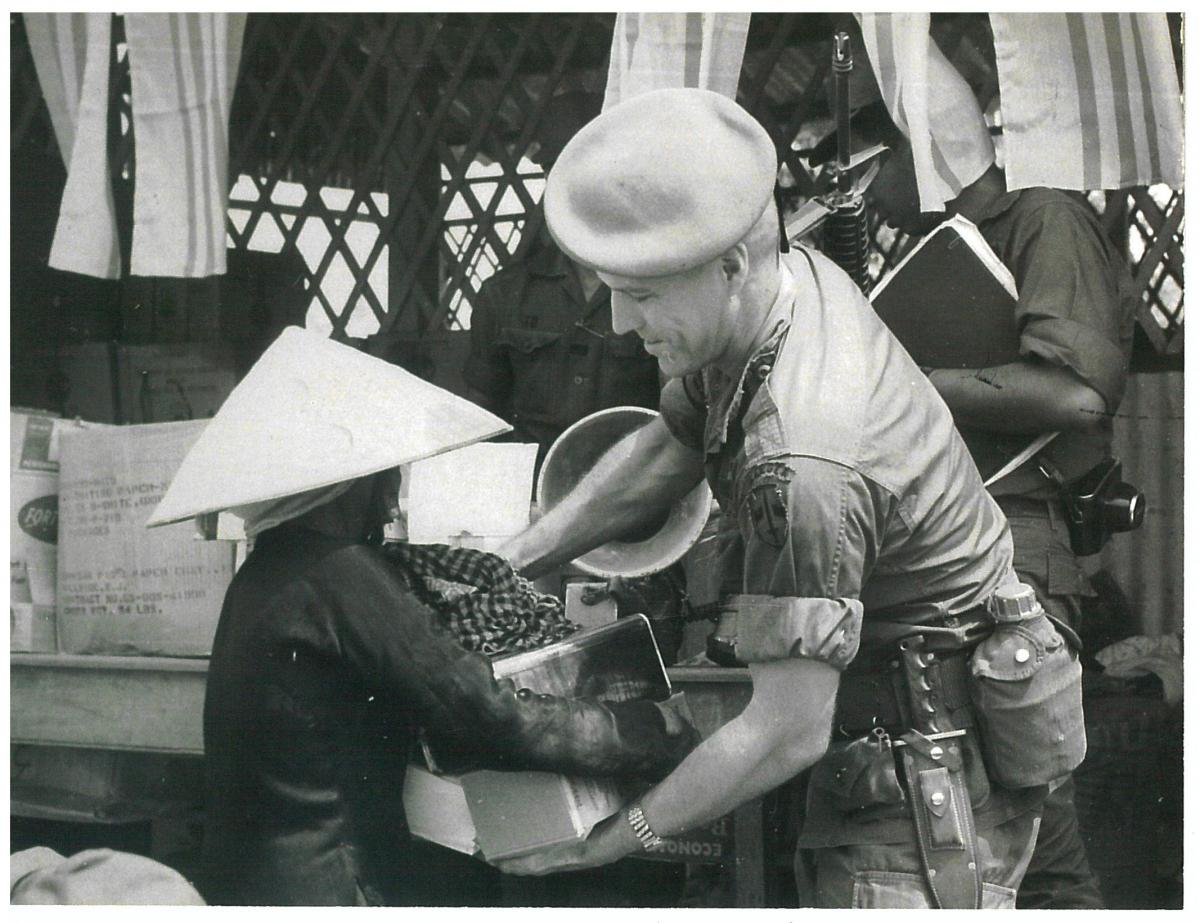 Thomas Johnson during the Vietnam War.The dense jungles of Vietnam is where Thomas Johnson, 80, a retired United States Army soldier, learned his definition of survival. Throughout his 21-year career with the military, Johnson was deployed twice to Vietnam, in 1968 and 1970. During his combat service, he survived enemy ambushes, crawled through muddy terrains covered with Agent Orange and escorted the remains of two of his closest friends back to the United States for burial.

When the war was over, Johnson returned home and worked in various military roles before retiring from the Army at the Pentagon in 1981. After a career dedicated to defending America, Johnson could not have foreseen that he was about to engage in another battle against a more insidious enemy – cancer.

“I knew Agent Orange was probably deadlier than the military was saying it was,” explained Johnson. “After the war, I was concerned about prostate cancer, so I proactively began seeing a urologist. I knew that if prostate cancer is caught early enough, there are more treatment options available.”

Between 1962 and 1971, the United States Air Force sprayed millions of gallons of herbicides and defoliant chemicals, like Agent Orange, in Vietnam to destroy crops and clear the jungles that made combat difficult. A 2013 study conducted at the Portland VA Medical Center and Oregon Health and Science University found that Veterans exposed to Agent Orange are not only at higher risk for prostate cancer, but they are more likely to have aggressive forms of the disease. Read the abstract for the publication, Agent Orange as a risk factor for high-grade prostate cancer.

Following his return from Vietnam, Johnson was routinely checked to see if he was developing cancer or other diseases due to his exposure to Agent Orange. In April 2012, the Fredericksburg, Virginia, resident visited one of his local oncologists because of a rising prostate-specific antigen (PSA) level. After undergoing a biopsy, it was confirmed that Johnson had prostate cancer.

Johnson immediately underwent six weeks of radiation combined with hormonal therapy to attack his cancer. Once he finished his radiation treatment, Johnson’s PSA was barely detectable, allowing him to continue taking only the hormonal treatments. However, in July 2016 his PSA level began creeping up again and doctors believed the disease had metastasized.

“It scared the hell out of me,” said Johnson, describing his diagnosis. “I was discussing my case with some friends when someone told me, ‘forget about the doctors here in Virginia, get to Duke and ask for Dr. Dan George.’ I sat down that night, did a quick Google search on my computer and sent him a detailed letter asking for an appointment.” 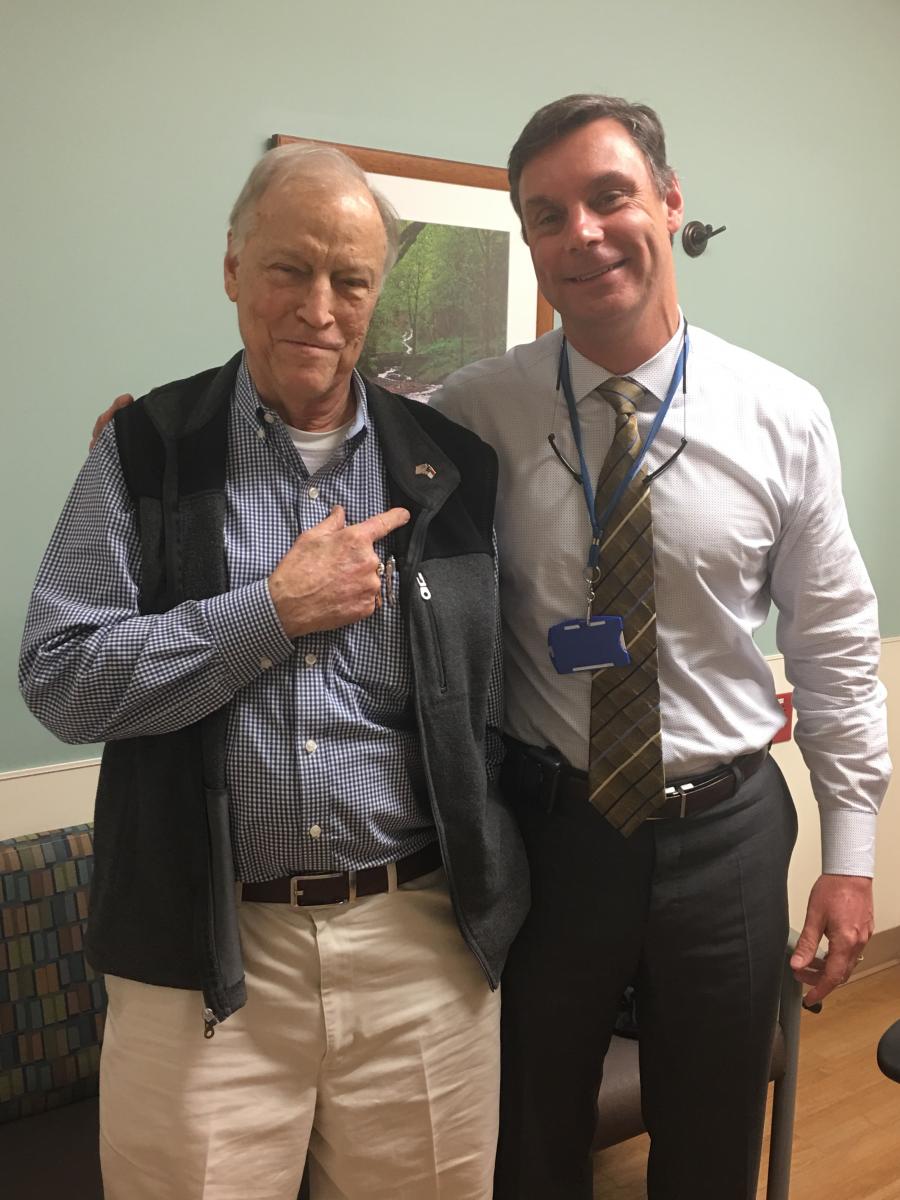 In July 2017, after undergoing scans, George confirmed that Johnson now had advanced prostate cancer that had metastasized to his lymph nodes and bones. Working with Johnson’s local oncologist, George scheduled hormonal treatments for his advanced disease closer to Johnson’s home in Virginia. In July 2018, his PSA plummeted to the lowest level since 2015.

"Mr. Johnson sought treatment for advanced prostate cancer at Duke because he wanted access to experimental treatment," explained George. "Originally, I told him that his best treatment option was standard of care, and that he could receive that locally in Virginia. He agreed to begin with the standard of care option, but he also chose to remain a Duke patient and now travels here every few months to receive treatment. If his disease ever becomes resistant to his current treatments, we are ready with different options."

Recently, his PSA has begun creeping up again and he has developed some increasing hip pain.  He came back to Duke where his care team was ready with a new treatment option.

Since starting his treatment at Duke Cancer Institute, Johnson has come to have a deep appreciation for the people of North Carolina, who he says are some of the kindest and most welcoming he has ever met. He enjoys recounting stories of random acts of kindness that he has experienced while spending time in Durham for his treatments.

Over Veterans’ Day weekend, he was the recipient of two such random acts of kindness. The first came during a morning stopover at a local Bojangles for a quick breakfast. “A nice lady asked me if I was a veteran,” recounts Johnson. “When I told her I was, she said she knew the answer without hearing my reply and pinned a nice enamel badge featuring both the American flag and the N.C. flag on my jacket.”

Giddy from the kindness he had just received, Johnson continued his drive to Durham. Once he arrived, he checked into his hotel before heading next door to get dinner at Pomodoro, an Italian-restaurant near the medical center.

“After I finished dinner, I asked the waitress for my check and she said, ‘You owe absolutely nothing! A gentleman and his daughter two booths behind yours said they were confident that you were a vet and paid your bill in full,” explains Johnson, still beaming from the kindness. “I have never had a complete stranger buy my meal before, and I wish I would have been able to thank them! It was incredible how wonderful the people of North Carolina were to me that day, I called my wife and told her that we may need to move here!”

The kindness of North Carolinians continues to come Johnson’s way. During his last visit to Duke, he received the same hospitality at Pomodoro as the last visit to the restaurant.

“Although it is hard to believe, it is absolutely true that I witnessed a Yogi Berra’s ‘Déjà vu all over again’ moment when I asked for my check from a different waitress than the one before who said precisely the same thing with the words, ‘You don’t owe a thing,” stated Johnson. Once again, I asked by whom, and she pointed out where the gentleman was seated with his wife or girlfriend, but once again, they had departed before I found out that my bill had been paid.  The citizens of Durham are, without a doubt, some of the most patriotic and nicest people in the United States!”