Farmer Remains True To His Roots During Cancer Treatment 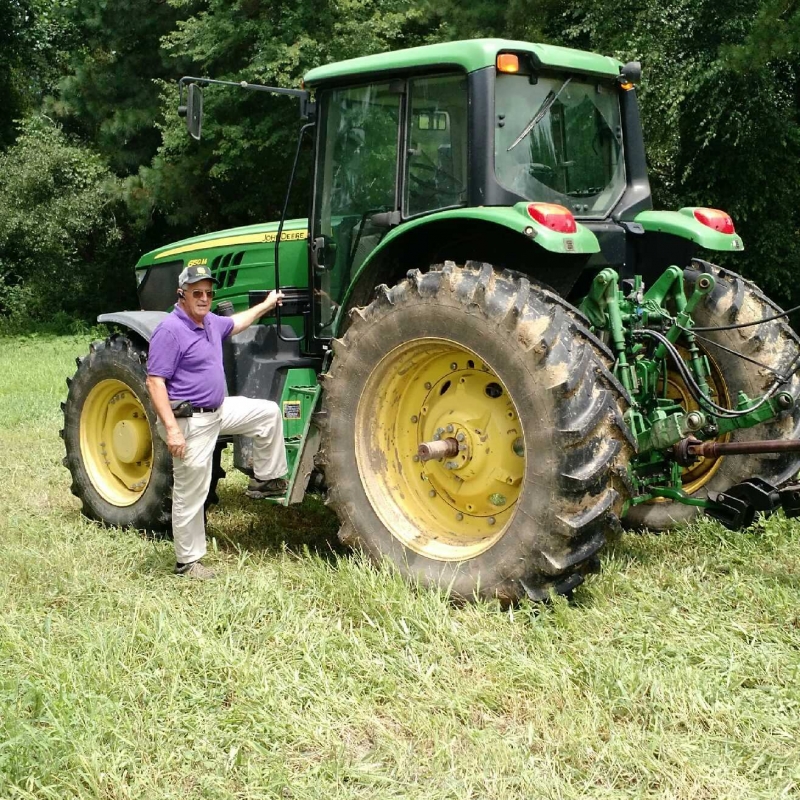 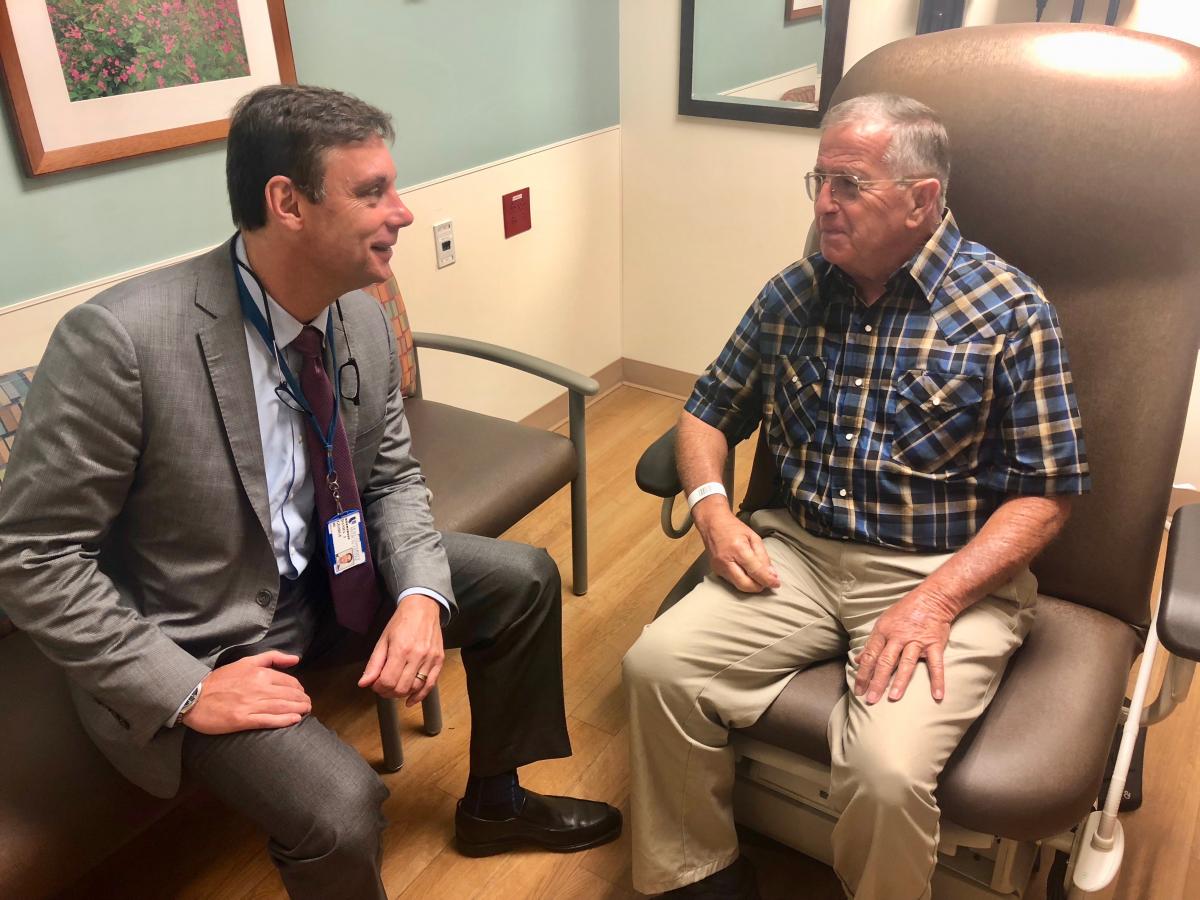 Daniel George, MD, and Otto Griffin discuss his treatment plan during a clinic visit.As a child growing up in the 1950s, Ernest “Otto” Griffin, spent a great deal of time outdoors working on his family’s farm in Seven Springs, North Carolina. Those years sparked a love of agriculture in Griffin, who eventually became the head forester at Duke Forest. As famous forester Jack C. Westoby once remarked, "Forestry is concerned not with trees, but with how trees can serve people.” For Griffin, serving people has been his life calling – whether it was through forestry, preaching, the family farm or his newest mission, beating cancer.

“Every day brings new obstacles,” said the mellow-toned fourth-generation farmer. “One time, I was trying to guide a baby calf into a pen, so I grabbed on as tight as I could to the tail and ended up spooking the animal who then took me for a ride in the opposite direction of the pen. After dragging me around the barn, the calf decided it actually did want to go into the pen and quickly redirected, sending me flying face-first into a pile of mud! That’s life though, you never know which direction it will send you.”

In March 2018, when Griffin went for his annual physical, his primary care physician noticed an elevated prostate-specific antigen (PSA) level of 23 and immediately referred Griffin to Duke Cancer Center for a biopsy with prostate cancer specialist, Judd Moul, MD. Despite having no symptoms or family history, Griffin was diagnosed with stage 3 prostate cancer, and Moul recommended he visit Duke’s Multidisciplinary Prostate Clinic to better understand all his treatment options.

The multidisciplinary clinic offers consecutive appointments with oncologists from three disciplines: surgical oncology, radiation oncology and medical oncology. The patient meets individually with each provider to be educated on the range of available treatments for their specific diagnosis. During this time, they also discuss the patient’s preferences for their care. Next, the physicians meet to discuss their individual meetings with the patient and design an optimal treatment plan, which is then recommended to the patient. During Griffin’s appointment, he met with surgical oncologist, Michael Ferrandino, MD; radiation oncologist, W. Robert Lee, MD; and medical oncologist, Daniel George, MD.

“The initial diagnosis didn’t scare me because we all have things that happen to us in life and I know that my life is in God’s hands,” said Griffin. “I listened to His calling and He led me to the wonderful care team at Duke. The multi-disciplinary clinic was very helpful because they presented me with multiple treatment options, and I felt confident in the direction of my care.” 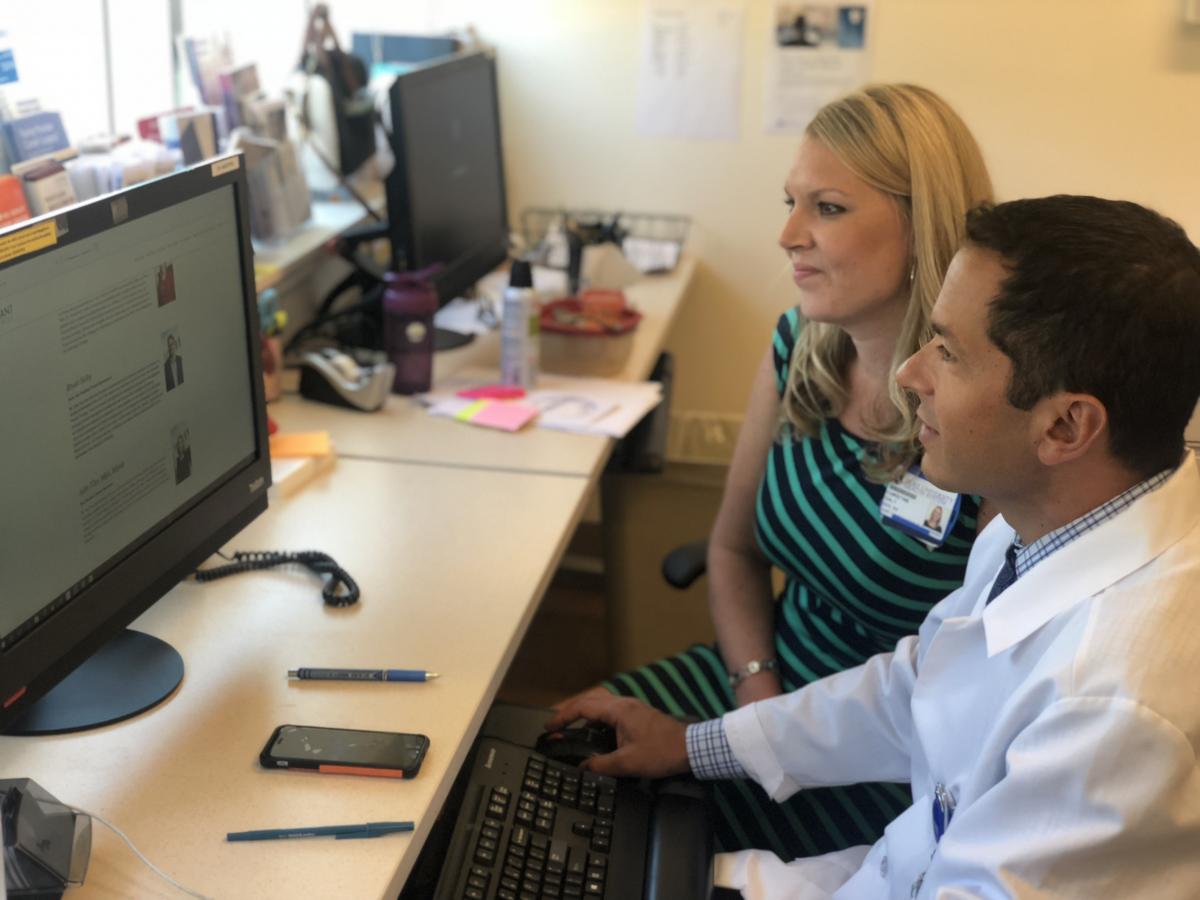 Michael Ferrandino, MD, and Christine Daly, BSN, RN, review protocols for the trial.Working together as a team, Griffin’s specialists devised a personalized treatment plan, which included an option for enrollment in a clinical trial. Griffin, who preferred to avoid surgery or radiation if possible, started under the care of George.

During his first appointment with George, Griffin enrolled in a multinational, randomized phase 3 clinical trial that studies whether a new hormone therapy drug can lower the level of testosterone in the blood of men with advanced prostate cancer.

“Our plan was to do a combination of hormonal therapy and radiation therapy, which this study allowed,” explained George. “We offered this trial with the hope that an oral luteinizing hormone-releasing hormone (LHRH) antagonist might allow for testosterone levels to recover quicker and more fully following one year of suppression than the LHRH agonists. Our hope was the oral agent would offer more rapid wash out and potentially a faster and more complete recovery.”

Traditionally, when a patient’s PSA rises after a therapy, such as a prostatectomy or radiation, the current standard of care is to suppress testosterone levels through intramuscular injections a patient receives in the clinic approximately every three to six months. The injections are a long-acting substance and produce mild side-effects. The clinical trial tests a short-acting substance drug that is an oral alternative to the standard of care injections. It lowers testosterone by inhibiting pituitary release of follicle-stimulating hormone and luteinizing hormone, which is a different mechanism of action compared to current standard of care.

“Studies like the one Mr. Griffin is enrolled in are important to researchers so we can continue to do clinical trials that assess new drugs and new drug delivery systems,” said Ferrandino, principal investigator of the study at Duke. “This new medication will hopefully be an easier delivery method with a more rapid onset and resolution of effect after stopping. We also hope this will be as effective as current hormonal therapy’s. Additionally, there is a sub study going on in regards to a smart pill bottle that may help with patients taking any form of oral medication.”

Griffin has been on the clinical trial for three months and is responding very well to treatment. Besides needing to take little breaks during the afternoon, he is still waking-up early before the sun rises to manage the family farm. Also, when called upon, he is able to stand behind the pulpit on Sunday mornings and lead his congregation in worship.

“Philippians chapter four reminds us not to be anxious about anything, but instead be constant in prayer,” described Griffin. “I am thankful that my daily life has not been affected much by the treatment and I have full confidence that God has led me to the right care team and clinical trial. Together, we are tackling this cancer head on — hopefully I don’t slide into any mud while putting cancer in its pen!”