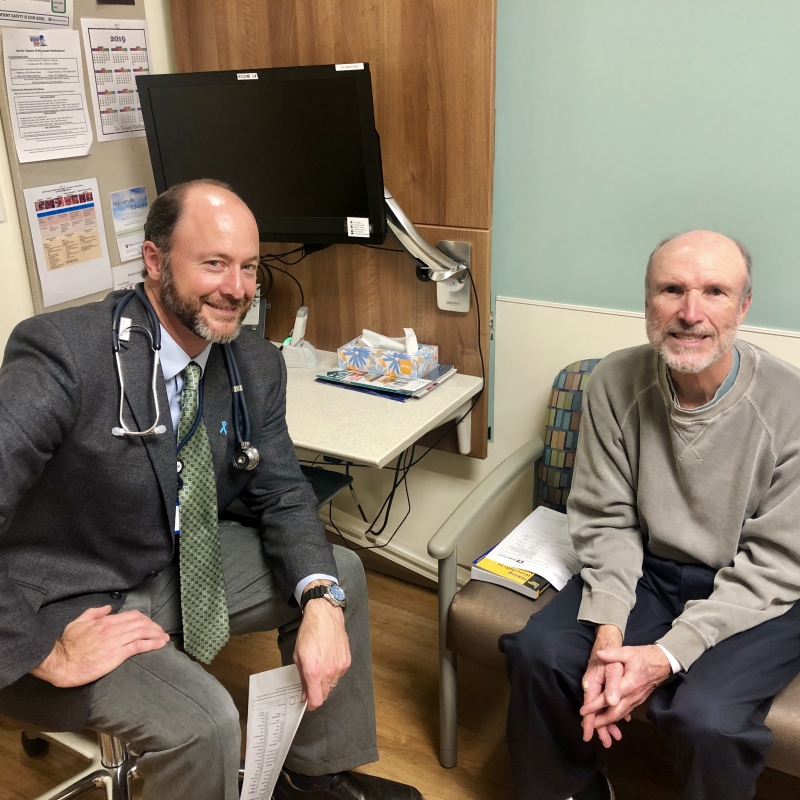 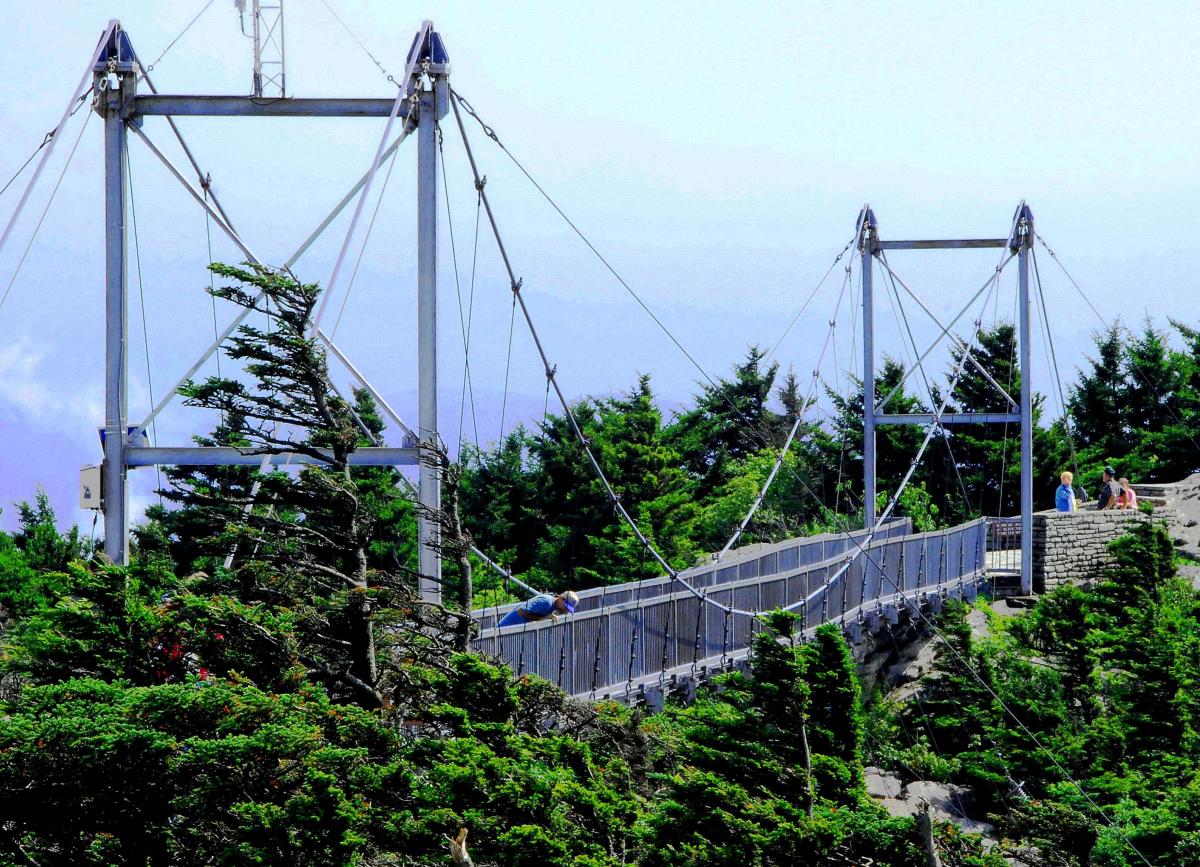 Photo by Helen Hopper, Grandfather Mountain: The Mile High Swinging Bridge. The bridge rests 5,280 feet above sea level and 80 feet above the ground.Ron Deranek, 68, loves the adrenaline a great hike brings to him, and he will travel anywhere in North Carolina to seek out the best mountain-top views. When he committed to hiking the Grandfather Trail at Grandfather Mountain, a 2.4-mile ridgetop stretch to Calloway Peak (better known as the “trial with ladders and cables”), he really had no idea what he was getting himself into until he saw it up-close. The hike is a straight-up ascent, and there is no turning around unless you are prepared to blindly climb backwards down steep mountain edges.

“Honestly, the crying people should have been my first warning that the climb was going to be difficult,” joked Deranek. “It was a hike unlike any other. I was sky-high in a tree canopy overlooking the most beautiful mountain views. It was the perfect hike, until I hit the ladders. The first couple of ladders were okay, but I made the rookie mistake of looking over the edge before the final climb and oh my, what a drop! I had to take a few minutes before I could muster up the courage to finish. I promised myself I’d finish, so I climbed that final ladder literally one rail at a time.”

Deranek carried that same drive and sense of commitment into his fight against cancer. In 2008, at an appointment with his local urologist, Deranek learned that his prostate-specific antigen (PSA) level was high. However, his biopsy results evidenced no sign of disease, and his urologist recommended that he monitor the levels through yearly PSA checks. In September 2015, his PSA level rose to above 10, and Deranek underwent another biopsy that confirmed prostate cancer.

Deranek, a retired structural engineer, understood the importance of exploring a variety of treatment options in order to select the best plan. He also wanted to identify options that carried as few side effects as possible, so that he might continue his weekly hiking, fishing, and golfing hobbies.

“After my diagnosis, I began thoroughly researching prostate cancer. I wanted to understand every possible treatment option and side effect. I knew radiation therapy was a viable option, so I got online and searched for the cancer centers that were leading the nation in prostate cancer treatment,” said Deranek. “That’s when I found Duke. There was a number on the website, so the next morning I called it and Dr. Koontz picked up. She helped connect me to the right people and within two weeks, I was set up with an appointment.” 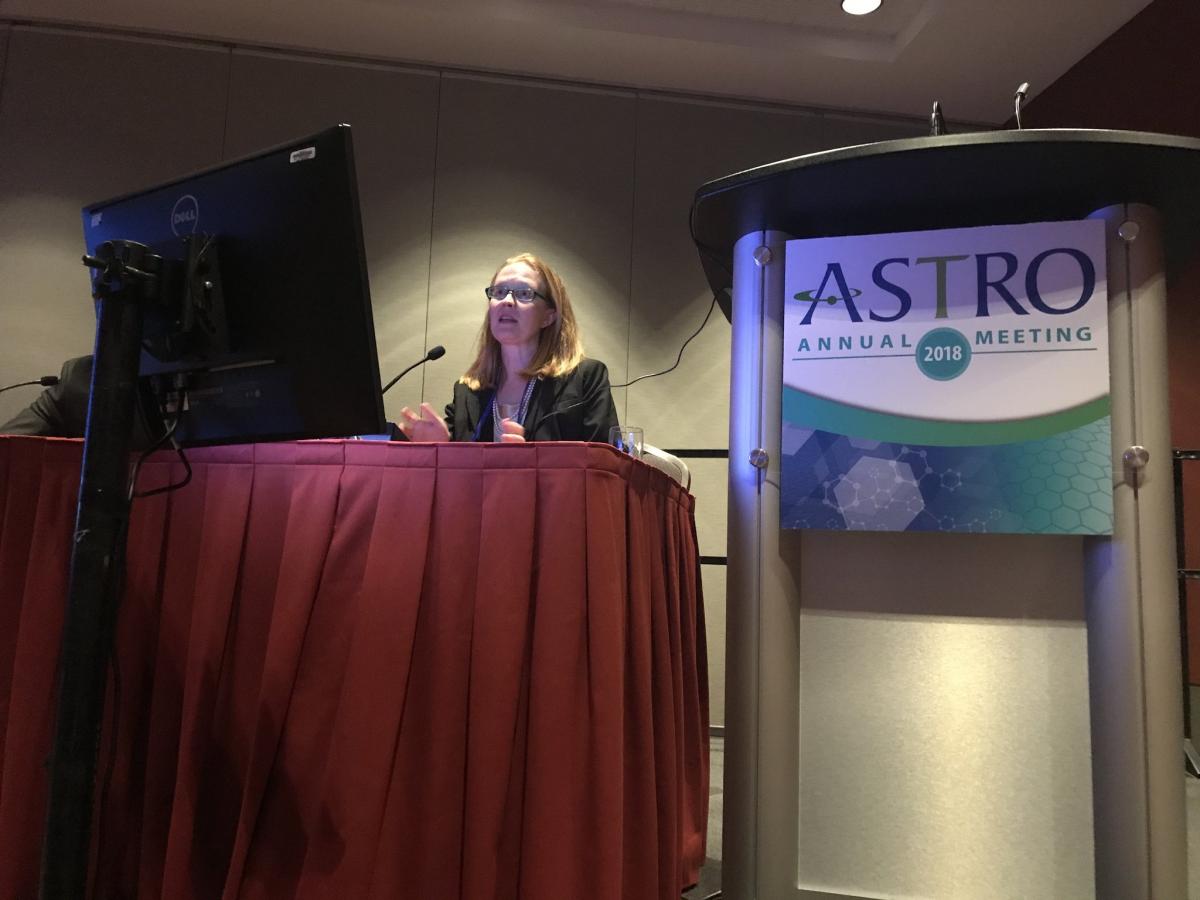 At Deranek’s first appointment with Koontz, he learned about a clinical trial, investigator-initiated by Koontz with the nickname AbiRT, studying the effects of combining radiation and two types of hormone therapy together. Koontz’s hypothesis was that this combination using only 6 months of hormone therapy would lead to cancer control with less hormone side effects than the traditional radiation approach to high risk prostate cancers.

“Our goal with AbiRT was to find people with high-risk, localized prostate cancer and treat them with an aggressive combination hormone and radiation therapy for a short period of time,” explained Koontz. “For this study, we worked with MD Anderson and enrolled 37 patients. 30 months out from the conclusion of the study, no participants have yet shown abnormal PSA levels. These results are exciting, but we need more time to study the data. Our goal is to continue to cure men with fewer side effects, and this study was a positive step in that direction.”

After reading over the study papers, Deranek enrolled in trial in Dec. 2015 and was referred to Andrew Armstrong, MD, a medical oncologist specializing in prostate cancer. Armstrong managed Deranek’s advanced prostate cancer treatments.

“The best part about the clinical trial was that my life remained the same,” said Deranek. “There were no side effects! The five-hour roundtrip commute up to Duke Cancer Center each day was more than worth it to me, and I am still able to do all the activities I love, like spending five hours hiking Grandfather Mountain.”

After completing the treatments in June 2016, Deranek’s PSA became undetectable, and his cancer was declared in remission. Every three months he returns to Duke Cancer Center or Duke Regional Hospital to monitor his PSA.

“I never let myself get fixated on the fact that I had cancer,” said Deranek. “I did my research, and put myself in the best hands possible. Every single person at Duke Cancer Center and Duke Regional Hospital went above and beyond in my treatments. My life continues to be full of the things I love. I recently bought a book highlighting the best waterfalls in North Carolina. Thanks to my treatment at Duke, I plan to hike to those waterfalls.”